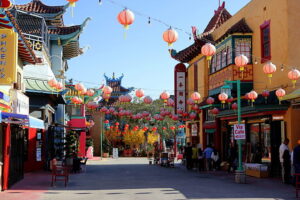 Chinese culture has had many wonderful impacts on American society. Much of what is normal in American society has its roots in Chinese culture. Food, celebrations, interior design, medicine and even language are a few of the ways that Chinese cultural influence is seen in America. International business with China has also grown and expanded, creating an opportunity to exchange ideas, traditions, products and the need for Chinese translation services.

The most obvious Chinese influence is food. Most Americans love Chinese food, which can be authentic and like what one would find in China, or Americanized. Chinese food staples like sweet and sour pork, chop suey and General Tso chicken were actually developed for American diners. Fortune cookies, some people’s favorite part of the meal, were even developed here and are not traditionally part of a Chinese meal. One article states that there are over 40,000 Chinese restaurants in America, three times more than McDonalds. Of course there are chains like P.F. Chang’s, Pei Wei and Panda Express, but there are also many family-owned local restaurants in cities all over the country, making the delicious cuisine available to the masses.

Many Americans also celebrate Chinese holidays like the Chinese New Year. As mentioned in a previous post about Mandarin translation services, many cities around the country will hold community events to celebrate the Year of the Rooster. Restaurants will have special meals, Chinese-owned businesses will have special hours and deals, cities will have parades, and much more. As Chinese people have relocated to the United States, they have shared their customs and traditions, which many Americans have excitedly embraced. Fireworks, invented by the Chinese, are a way that may Americans celebrate not only the 4th of July, but other special events like concerts, New Year’s Eve and weddings. Feng Shui is a largely popular system that many Americans consult when decorating their homes. Many people have redecorated their homes in accordance with this practice to bring peace and positivity to their house.

Americans also consult traditional Chinese health remedies. Herbal teas for ailments like headaches, stomach aches, sleep aid, energy and more are sold in most grocery stores. A lot of American doctors recommend taking Echinacea when patients are sick. Acupuncture is a widely-sought after remedy for ailments, and has become so popular within American culture that many health insurance plans will cover it. Although it may not be obvious, the English language has also been influenced by the Chinese culture. A recent article states that American slang words like chop comes from the Cantonese word for hurry. Another Cantonese word that Americans use is chow for food. Chinese translation services are needed not only for everyday speak, but in the business world as well. It’s no secret that China’s economy has been booming in recent history, making it important for international companies to partner with dependable document translation services companies like ASTA-USA Translation Services, Inc.

In order to continue fully exchanging ideas and products, American companies need access to fast, accurate and reliable Chinese document translation services. There are many different dialects of the Chinese language, and ASTA-USA can translate for each one. Our accredited translators can translate into and from whatever dialect your company needs to communicate in. We provide Chinese translation services for a variety of industries like business, legal, finance, marketing, science and research, government, education and manufacturing. We can also translate into and out of 70 languages, not only the Chinese dialects. For 30 years we have worked to become one of the best document translation service providers in the industry. Contact us today for your free document translation quote and let us help you connect with a broader audience and international business partners.